Formby: Wartime base for the Chindits 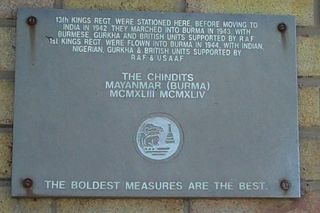 Yesterday morning I attended the funeral of Mary Creagh OBE. TD.JP.DL D*CHS a very popular, active and redoubtable resident of Formby. I knew her as a member of my Church, St Anne's Freshfield, but she was known to many more in a wide range of roles. During her very active life she was Deputy Lord Lieutenant of Merseyside, and among many other activities Colonel in Chief of Formby Royal British Legion. I took the opportunity later in the morning to let Cyril Golbourne, the current Chair of the local Branch, know about an old weatherbeaten plaque attached to the wall of an Electricity sub-station on one of Formby's many footpaths, between Proctor Road and Gorseway.

As I was photographing the plaque a little while ago, some local residents asked me if I was reponsible for it, they went onto tell me that up until about two years ago, an elderly gentleman would lay a wreath on VJ Day. They wondered who he was and what had happened to him, because the wreath laying had stopped. I promised I would follow it up, so rather belatedly I told the Formby RBL about it yesterday, Mary Creagh wouldn't have taken as long as I did. Cyril went to see it in the afternoon, he didn't know it existed and he has phoned since to say he'll take up the question of it's condition and try to make sure that the memory of the Chindits here in Formby is maintained.