The weather may be miserable this morning, wet and overcast, but the village is still a sea of colour. Following the recent efforts of the Formby Parish Council the village scene has been enlivened by colourful displays of flowers.

The organisers, members of the Parish Council, are waiting to hear the results of the recent visit by the 'Village in Bloom' judges. 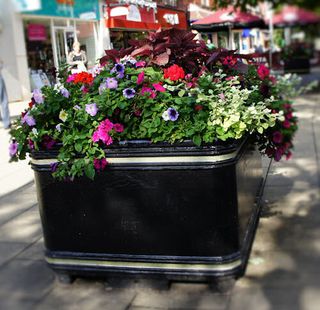 Here are an assorted series of slides of Formby Park bowling club members practising before an away bowls match at Tin Tabs Bowling Club. Sorry guys I could not resist it! Incidentally they lost 8-2 to Freshfield for whom I bowl.

A short video to provide a flavour of 'bowls at Tin Tabs', Freshfield Bowling club, here the opposition from Formby Park are in playful mood as they practice before the match. Later Freshfield's skipper, Chris Gordon led his team to a satisfying 8-2 victory.

It was a good night for all of the participants.

Bowls at Tin Tabs from Sean Brady on Vimeo.

Crown green bowls is one of the oldest forms of bowls in this country. Players bowl a 'biased jack' across a green that has a raised centre. 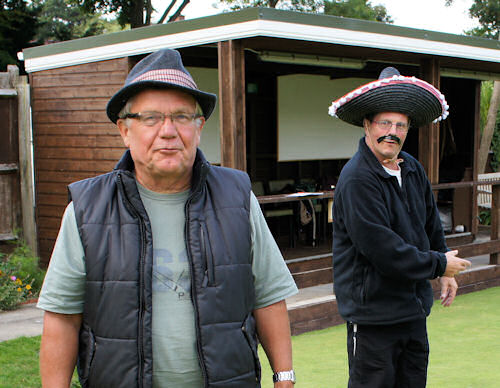 At an away game last night players from Formby Park decided to wear a variety of hats in honour of their player, Ray Hampson shown here on the left with his colleague Eric. Tin Tab players, the home team in this case were slightly bemused at this but knowing Ray and his propensity for hats, he also plays for Tin Tabs in other leagues, joined in the spirit of the occasion.

Crown green bowls is played in the North West of England and in some parts of the Midlands. Players use the jack to either bowl a 'straight' peg across the crown or 'round' peg, the jack either resists the effect of the slope of the ground or uses it to produce curved 'marks' or paths along which each bowler in turn attempts to get closest to the jack. Players do not bowl up and down an 'alley' but can use any direction or 'length' they choose.

Oh, why Tin Tabs? Well the bowling club, formed in 1894 two years before Parish Councils, made use of a redundant Tin Tabernacle Church that was and still is used as the club house.

At yesterday's evaluation meeting of this year's Formby Live Music event it was agreed that the team would start planning for another festival in 2011. Under the enthusiastic leadership of Pat Wordley, Cafe D'Art, this year's festival has been universally hailed as a success, well done to Pat and all the team. There is a lot to be done if we are to maintain the standard and try to achieve even more.

We're going to follow up the event with an immediate survey of local businesses for their views and to seek their support and further sponsorship.

If you can help in anyway or want to take part then please write to me as soon as possible.