What Are Your Priorities?

At tomorrow evening's meeting Formby Police will be asking the public for their Policing priorities. What would you choose as your three main priorities in order of importance?

Even if you can't attend you can still let the local police know by filling in a card at Formby Police Station. Each month these locally decided ideas are reviewed and amended on the basis of the public choice. 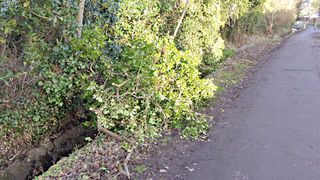 I have just reported some fallen trees and bushes that are likely to block Dobbs Gutter.

There is also another large bush-like fragment to the right of those shown in the photograph. This suggests that these have been dumped and that they are not simply the result of the recent bad weather.

Dobbs Gutter which runs alongside the edge of Long Lane is an important watercourse. It has flooded in the past and these new obstructions will lead to flooding again if they are not removed.

I have reported the problem using the 'Fix My Street' web site, which I heartily recommend.

More on the Localism Bill

I have embedded the Parliament TV coverage of the second reading of the Localism Bill, which took place in the House of Commons on Monday 17th January. The terms of use do not allow me to edit the sequence so the link actually includes the whole of the Parliamentary day's business. However, once the clip begins if you move the cursor on the time line to 16:04:03 the clip will then begin at the point when the second reading is moved by Eric Pickles, The Secretary of State for Communities and Local Government.

The Bill has now been sent to a Public Bill Committee for scrutiny and there is a call for written evidence. Do you have relevant expertise and experience or a special interest in the Government’s Localism Bill? If so, you can submit your views in writing to the House of Commons Public Bill Committee which is going to consider this Bill. (UK Parliament)

The Formby Parish Council finance committee meets this evening at 7.00pm. The meeting will be held at it's usual venue, the Bier Hall, St Peter's Church, Freshfield.

As a regular commitee of the Parish Council, the public have a statutory right to attend. The members will review the progress of the annual budget and consider plans for next years expenditure.

I will be attending this regular monthly meeting.

I am Chairing a meeting of the Formby Village Business Partnership this evening. The meeting starts at 5.30pm and will be held in the Formby Library meeting room.