A Short Round up

In this article there are short updates on the Formby Live Music Festival, The Fragments Photographic Quiz and The Edible Garden Project.

By all accounts the Formby Live Music Festival went very well. I'm afraid I only managed to drive past at 6.45 on Sunday evening. I spent the weekend attending a Transition Towns Network Conference. The swimming pool green appeared to be full of happy revellers. Since then I've heard some very good reports about the event. Congratulations are due to Pat Wordley of Woodwards and all the others involved.

The original idea for the festival came about in a meeting of the now defunct Formby Village Business Partnership. It was always intended to draw locals and visitors alike into the village centre, I'm told that the village was very busy, sounds like a success.

Incidentally for a brief snapshot and to get a sense of how the main event went, there is a short YouTube video, which a local resident has published here.

In an earlier post I featured a photograph of a 'fragment of Formby', for those of you still puzzling over the location, it's one of the windows in St. Peter's Church in Freshfield.

Here's another 'fragment' a typical wooden gutter and drain pipe that feature on many of Formby's remaining thatched buildings.

Any idea where this is? Let me know by adding a comment below. 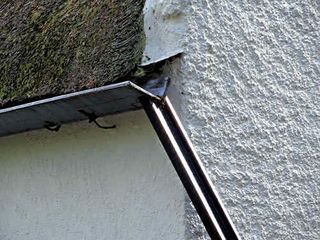 Finally I began an 'Edible Garden Project' on a personal basis some time ago. Following the Transition Town Conference last weekend I've taken the idea forward a little more. If you are interested in the idea and want to be involved have a look at some draft proposals here.