The Formby Edible gardens Project is described more fully elsewhere on this blog. For those of you who want to know more then follow the link to the explanatory page. If you are interested we are actively looking for people to join us.

As I promised yesterday to several people who tweeted the question "How did you make the raised beds?' This is the answer. At the moment the plan is for 4 of these raised beds on the small plot reserved for this project at Formby Swimming Pool grounds.

In the case of this prototype the wood was supplied by local timber merchants, Total Timber. They were very helpful and obliging in the design and order phase. The handiwork is mine alone. 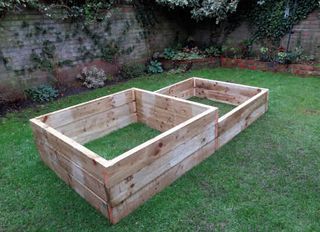 I won't go into the reasons here for using raised beds other than the size of the space and the needs of users are paramount. This prototype consists of 2 adjoining beds each 1.2m square (Approx 4 feet). We're intending to try out a form of The Square Foot Garden, follow the link for more information. We're also  using the RHS 10' x10' model, as featured in Carol Klein's Book, 'Grow your own'.

Altogether there are 16 planks cut to 1.2metres in length and 2 planks cut to 1.247metres. The last two are on the end of the lower bed. Each plank has an added short element for attaching each plank together. 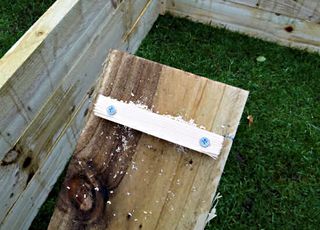 For Joining Each Plank

In the case of 12 ordinary planks, the jointing element is placed 47mm from an end. When that was attached I drilled 2 additional ready screwed holes to ease the process of assembly in the garden. In the case of the 4 1.2 metre planks for the smaller bed, the jointing element was screwed at the end of the plank. Again I added 2 ready drilled screw holes for on-site assembly. 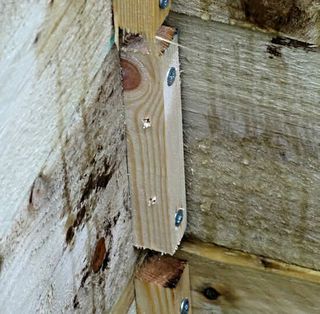 Finally the joining elements for the 2 lower bed end planks were added, also at 47mm from the end and then the prototype was loosely asembled as shown in the first photograph.

If you want to be involved or you already grow your own we would like to know, please contact me using the comment box below or the email link on the right-hand side of the page.

There is also another version of these instructions. This is an audio recording to accompany an animated sequence in which I describe the construction and assembly of the raised beds described above. It's a bit of an experiment of mine but I'd be keen to here your comments. Click Here.