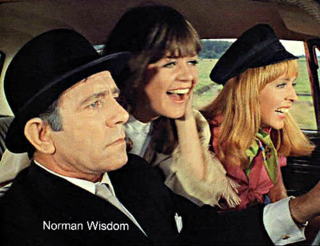 I've just come across a very small but fascinating glimpse of the past in Formby. Norman Wisdom starred in a film called 'What's Good for the Goose' that was made in 1969. He played a banker who is attending a conference and on the way he picks up two teenage hitch-hikers and finds himself confronting the 'Swinging Sixties'.
Some of the scenes were filmed in Formby, at the BP Petrol Station where Norman fills his car with petrol and the adjoining roundabout, where the two hitch-hikers get their lift.

These and more photograph of many of the scenes from the film are are featured on the Reelstreets web site. They are an intriguing glimpse of Southport, the Formby By-Pass and other parts of Merseyside.