Halloween Is Almost Upon Us

Halloween is almost upon us, time to prepare to 'batten down the hatches', turn off the lights and pretend you're not in - mischief night is coming! 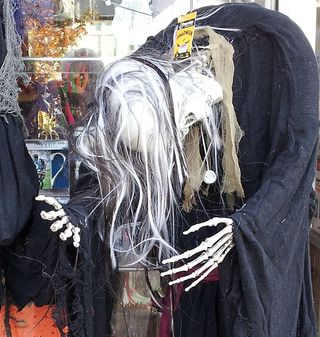 This ominous old character has been seen hanging around in the village. No doubt more will be walking around Formby in 'celebration'.

Halloween or Hallowe'en (a contraction of its original title "All Hallows' Evening"), also known as All Hallows' Eve, is a yearly holiday observed around the world on October 31, the eve of the Western Christian feast of All Hallows. Most scholars believe that All Hallows' Eve was originally influenced by western European harvest festivals and festivals of the dead with pagan roots, particularly the Celtic Samhain. Others maintain that it originated independently of Samhain.

I enjoyed it when my children were little, but I worry about the commercialisation of the event. Too many ready made goods and disguises have become 'must have' purchases on the part of children.

Am I wrong in believing it was more fun making and carving the items yourself? Or am I becoming Grumpy!

Anyway, for those of you out there in the dark, please respect those neighbours, who now find it a little over the top.