A View From The Gallery

On 22 November Sefton MBC convened for a normal meeting. In this case, however, the public gallery was full to overflowing and other members of the public stood outside the Town Hall. In the first time in the memory of Council officials over 4000 residents had submitted a petition. The full agenda item is shown below.

In accordance with the Council’s Petition Scheme, a petition containing 4,298 signatures has been submitted by Formby Residents Action Group Opposition From Formby (FRAGOFF)

Discussions regarding the Local Plan have been on-going for a long time without any way forward and the residents of Sefton have now been left exposed to developers with no concerns for the local community and leaving us unprotected.

The action petitioned for is:

“We the undersigned urge the Council, to include its officers, elected members and its Leaders, to implement a Local Plan which protects the green belt, farm land, countryside and residents in Sefton from any development on such land and that they address this issue as a matter of urgency.”

The lead petitioner, Mrs Maria Bennett, from Formby, is the Chairperson of FRAGOFF and she will be permitted to address the Council for 5 minutes at the Council Meeting. The petition will then be discussed by Councillors for a maximum of 15 minutes and the Council will decide how to respond to the petition at the meeting.”

All of the speakers noted and welcomed the views of those present and supported the suggestion that their views should be incorporated into the Local Plan Consultation Framework within the existing timetable. Sefton Council’s consultation process for the Core Strategy/Local Plan has so far received over 3000 responses.

In that respect this was a very great success and the organisers and the public are to be congratulated on their hard work and support.

Why then are so many people disappointed?

All Council meetings are ‘Statutory Bodies’ they are governed by Law and a written Constitution. Each of the Councillors commented on the necessity to ‘follow’ the Law. 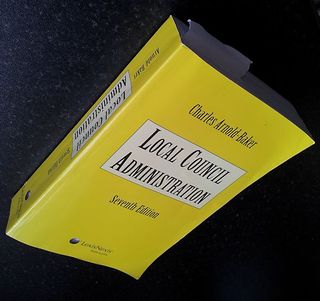 Here’s an illustration this inch+ thick book sets out to guide Parish Councillors on their legal powers, rights and duties.

Parish Councils are much smaller and their legal powers limited in comparison with Metropolitan Councils. But failure to follow the requirements of the Law in all Councils would lead to decisions which can be overturned.

In the case of planning issues, a failure to follow the Law, would enable Developers to successfully overturn any such flawed decisions.

Why Did the Council just resolve to note the petition?

A review of the documents submitted by officers to the Planning Committee and the Cabinet reveals the constraints imposed by Local Government legislation on Council procedures. The consultation process has to be followed even, if as in this case, residents would like to see the completion of a Local Plan sooner rather than later. This explains the constant reference to ‘The Law’ by all of the Councillors who spoke.

Why were questions disallowed?

The petitioners were surprised and annoyed they could not ask questions, the answer lies in the Council Constitution which is referred to in the motion preamble ‘the Council’s Petition Scheme’. No questions are allowed. There is a different procedure for questions.

Why were there so few speakers?

Many have commented about the very limited debate by Councillors. Again the Council Constitution may hold the key.

‘PRE-DETERMINATION OR BIAS
15. Where you have been involved in campaigning in your political role on an issue which does not impact on your personal and/or professional life, you should not be prohibited from participating in a decision in your political role as a Member. However, DO NOT place yourself under any financial or other obligation to outside individuals or organisations that might seek to influence you in the performance of your official duties.’ (Page 33 Sefton MBC Constitution September 2012)

‘214 The Council’s Code also sets out the duties and responsibilities of Members. It states that whilst Members owe a special duty to their ward constituents including those who did not vote for them, their overriding duty is to the whole community. Members should not favour any individuals or groups and although they may be influenced by the opinions of others, they alone have the responsibility to decide what view to take. Members must therefore represent their constituents as a body and vote in the interests of the whole Borough.’ (Page 277 33 Sefton MBC Constitution September 2012)’

Under these constitutional requirements Councillors frequently try to avoid giving outside bodies an impression of Pre-determination or Bias and therefore  an opportunity to accuse them of making an unlawful decision. The Councillors who did speak confined their comments to the requirements of Law, the on-going consultation process and the increasingly wide public concern regarding the future of the Greenbelt in general.

There are many more facets to the Councils Constitution which bear inspection and I recommend further study for those who are interested. They are readily available on Sefton MBC web site.

To finish on a positive note, the Petition was very successful and in my view it will contribute greatly to the final version of the Local Plan.  You may have a different view from mine, please use the 'My Comments' link to add your comments. Remember they must be legal and decent.