Will Formby Be Treated Equally In The New NHS?

At 10.00am on Thursday Sefton MBC Cabinet members will meet at Bootle Town Hall. They have a heavy agenda. One of the items under discussion includes the abolition of the PCT.

Sefton Council will take on the lead role for public health from 1 April 2013 as a result of the Health and Social Care Act 2012.

As a consequence of PCTs being abolished as legal entities on 1 April 2013 it is necessary to transfer all assets and liabilities currently belonging to PCTs to other legal entities, such as local authorities, Public Health England, National Health Service Commissioning Board and Clinical Commissioning Groups.

This transfer of assets and the size of the budget will figure large in the elected members discussions.

Part of the planned response to these changes includes the formation of a 'Health and Wellbeing Board'. This will become a formal committee of the Council. They will be expected to:

There is going to be much uncertainty about the impact of all these changes.

I have a question. If the funding is allocated on the basis of a formula that allocates monies to 'areas of need and inequalities', will Formby receive less than elsewhere in Sefton?

Formby is considerd to be a 'well off' area. But it also has one of the largest population of the elderly in the country. They are probably 'asset rich but cash poor'. Are the health and care needs of this group of residents going to be met equally fairly?

I suspect there is a busy debate going on behind 'drawn curtains'. Residents in Formby deserve to be informed.

Can You Spare An Hour This Weekend?

The Royal Society for the protection of birds needs your help this weekend. They want your help to conduct a short survey of birds you see in just one hour. 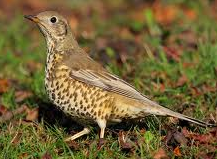 It's important our garden birds are disappearing. The survey could help to discover why and what to do about it?

In 1972 when I first moved into Formby the garden was full of flocks of noisy, busy sparrows. There were Blackbirds, Finches of all kind, Cuckoos, Mistle Thrush. We saw and heard Owls regularly, the evening sky was full of insects and bats.

This is all you have to do - three simple steps.

Record the highest number of each bird species you see at the same time. Don't count the total over the hour as you may get the same birds visiting more than once. Also, please only count those birds that land within your garden - not flying over.

For more see the The Royal Society of Birds.

Have you lost your glasses?

@formbyvillage Know anyone who lost their glasses in Formby dunes this morning? Direct message @sjmosport

The Met Office have recently updated their weather alert:

Further snowfall will spread from the west, as another weather front moves eastwards across the UK.

Snow will reach parts of Scotland during Friday morning, and eastern parts of England during the late evening, likely to clear these eastern areas by the early hours of Saturday. 4 to 8 cm is likely quite widely within the amber warning area, with a low risk of more than 10 cm locally even on lower ground.

Further north, accumulations of 10 to 20 cm may occur in some upland areas. Strong winds will also lead to drifting and blizzard-like conditions, particularly over higher level roads in the north. The public should be prepared for likely disruption, particularly to travel.

Times Are a Changing!

Recently I wrote 'Difficult decisions lie ahead for the community of Formby'. One of the major changes includes the inauguration of CCG's, Clinical Commissioning Groups that will come into force in April.

I came across the following presentation on The King's Fund web site in which they forecast the issues that lie ahead in the years for the 'Future of health and social care 2013-2033'.

Unfortunately this presentation does not work on the Android Platform, for a web based version see: Future Trends.

What are your views about the implications for Formby?

Click on 'Start prezi' in the middle of the screen.
Use the arrows at the bottom of the image to move between slides.
Once the prezi has finished you can zoom into areas that most interest you by clicking directly on the image.
If you want to view the prezi in full screen, click on the icon in the bottom right-hand corner. Press 'Esc' on your keyboard to return to the site.