The Vikings Are Coming

This page will be updated daily until Saturday when the Vikings arrive.

The Vikings Set Up Camp 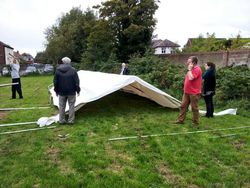 Here's Tony Higginson of Formby Books along with volunteers from The Dove Trust setting up the first of a number of tents and marquees.

Later this evening the 'real' Vikings and their goods and chattels will arrive. So if you hear sounds of unusual activity in a normally quiet part of Formby be assured this time The Vikings come in peace.

From 10 am tomorrow the camp and market will be alive and bustling with activity. There will be lots to see and do, why not come and see for yourself.

For all of the details have a look at The Formby Books web site.

Leonid Kolassa one of the organisers behind The Viking Medieval Market writes: 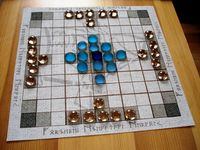 I have researched the 1600 year old game and come up with a set of playable rules and provided an understandable historical context which helps to understand the game better. As a result I have created a Fornebei Version which you can see first hand on Saturday and play - we are also running a Fornebei Hnefatafl Tornament for the first time!

Tony Higginson of Formby books has also taken the game into schools where it has gone down really well with the pupils - its one of those games that does appeal as it is easy to learn, simple but strategically fascinating.

We have started a Fornebei Hnefatafl Club (Herfólk) which mets on a Wednesday evening.

Is There A Peaceful Side To The Vikings? 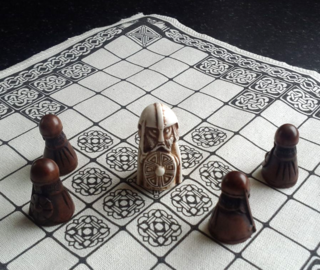 Hnefatafl Board Game
Well they liked games and 'Hnefatafl' is a good example. According to some it ranks as one of history's greatest board games. It's known that the Vikings played a version as early as AD400.

The name 'Hnefatafl' means  'The King's Table' and the point of the game is to capture the King. His piece starts at the centre of the board and is surrounded by his followers. The King has to be moved to any of the corners of the board. His followers try to prevent the opposing pieces (pictured) from blocking and isolating the King in a square. Once that happens the game is over.


It's Peaceful And Quiet Before The Viking Invasion 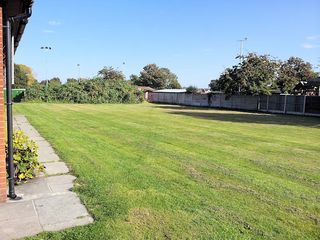 This small piece of land behind the Gild Hall will come alive this Saturday when the Viking and Medieval Market opens.

The event is a welcome return to Formby. There's already a buzz of comment on the internet and Twitter.

The last time anything like this happened was in 1999/2000 when a small group of local residents planned to celebrate the turn of the century and the dawn of a new Millenium with the first Viking invasion of Formby for a thousand years or more.

Make sure you don't miss this event this year. The more it's supported the more likely it'll become a welcome annual event in Formby.

Viking longships "Orm describes a Viking longship and explains what life was like on board." Watch a BBC video Clip http://t.co/x7qKOOUqnw

Preparing for The Vikings

Leafletting in Formby to publicise this Saturday's viking medieval market at The Gild Hall starts at 10 am. pic.twitter.com/vqCWwXtA3F

So too has Carla:

We'll be at the Formby Viking Medieval Market on Saturday! Kids activities and lots of lovely stuff for sale! Perfect for chrimble shopping!

Can you hear Vikings as they approach?

One of the most popular films in the 1950's was called The Vikings it starred Kirk Douglas as Einar, Tony Curtis as Erik, Ernest Borgnine as Ragnar and Janet Leigh as Morgana.

Even today it is regularly broadcast on Satellite Television. It has a most memorable soundtrack including the sound of Viking Horns announcing the presence of the Vikings.

Is an initiative by local residents and Formby Books more