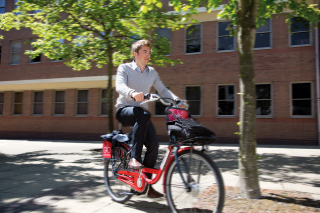 Bike & Go, which operates bike hire facilities from train stations around the region including Formby is inviting those already registered to the scheme to enjoy complimentary bike hire all day on Wednesday, September 13, in a bid to make it as easy as possible for everyone to ride to work for a day.

Cycle to Work Day has been gathering pace since its launch in 2013, with a total of 864,239 miles having been cycled so far in the name of the event. Cyclescheme, the team behind it, is now hoping that its fifth event will be bigger and better than ever, and Bike & Go are keen to support them in their quest to encourage more people to take to two wheels.

The benefits of cycling have been well documented, with a report published earlier this year revealing that cycling to work reduces the risk of death from any cause by 41%, the incidence of cancer by 45% and heart disease by 46%.

The study, by the University of Glasgow, also showed that a daily bike ride to the office nearly halves the risk of heart disease.

In addition, a 2016 Cyclescheme study revealed that employees who cycle to work are more likely to be on time, perform better, and save employers money.

Cycle to Work Day is a great way of reminding both employers and employees alike of the many benefits of cycling to work.

There are numerous reasons to take up cycling, and riding a bike to work is a great way to improve your health, do your bit for the environment, and maybe even improve your career prospects as well.

We’re delighted to pledge our support, and look forward to giving Bike & Go users the chance to participate in Cycle to Work Day free of charge.

Bike & Go offers bike hire facilities from 70 participating train stations across much of the North West, North East and Yorkshire, East and South East of England, and Scotland, with more locations opening this year.

Last year the scheme was praised by a UK division of the travel giant TripAdvisor when it was included in a list of the top seven bicycle hire companies drawn up by its subsidiary rental company Holiday Lettings.

To hire a Bike & Go bike, users simply need to register their card details online, which they can do via smart phones, tablets, or at home, and pay the annual £10 subscription fee. They will then receive a user number via email which will allow immediate bike hire – usually charged at just £3.80 per 24 hours up to a maximum of 72 hours - while they wait for their Bike & Go membership card.