Formby Civic Society has announced the recent death of a leading member of the society. Dr Reginald Yorke and his wife, Barbara were prominent long-serving, active members of the Society for many years. Reg was frequently sought after for his encyclopaedic knowledge of Formby. The heritage boards at either end of the village are the result of a collaborative project by Formby Parish Council and the Civic Society. The Society writes: 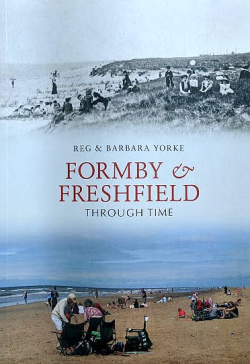 We are sorry to report the death of Dr. Reginald Yorke, who for many years was an integral part of Formby Civic Society together with his wife Barbara. It was only until a few years ago that Reg remained an active and determined Chairman of FCS, leading our Society in the introduction of Blue Plaques for Formby and researching and writing high quality materials on Ravenmeols and the 'lost resort' of Formby-by-the-Sea.

He was also a driving force in the establishment of the RAF Interpretive Panel at Wood Vale in 2016. Reg and Barbara collaborated on a number of books that traced the development of Formby, and together they researched and wrote-up the history of the Formby Lifeboat Station, proving it to be the first in the world!

These few words can not do justice to all that Reg Yorke has given to his community and the Society that has worked for the community since its inception in 1953. He will be sadly missed by his many friends and FCS members, but even more so by Barbara and the Yorke family."

Formby Civic Society has a long, significant and distinguished history in the civic life of Formby.

The Society was founded in 1953, 100 years after the coming of the railway to this sleepy and then entirely rural village and 50 years after its inhabitants obtained, (with great difficulty), status as an Urban District Council. Registered as a Charity, later affiliated with the Civic Trust, and now Civic Voice, the Society was founded to "foster the identity of Formby, safeguard its amenities, develop it cultural activities and encourage local studies".