“A fine and subtle spirit dwells
In every little flower,
Each one its own sweet feeling breathes
With more or less of power. “

(Opening lines of a poem by Anne Bronte celebrating ‘The Bluebell’)

I can still recall a childhood memory of walking through a vast, seemingly, everlasting bluebell wood. It was sunny, and my parents had decided on a ‘Mystery Trip’ one Sunday afternoon.

I’m sorry to say we picked armfuls of the flowers to fill vases on getting home. Nowadays, and rightly so, you can look, but not touch or pick.

What started this line of thinking was a small valiant patch of bluebells  I spotted thrusting outwards from beneath an adjacent garden fence while walking the footpath from Green lane towards Paradise Lane.

It displayed obstinate vigour in seeking its place in the sun.

I wonder will it still be growing there next year?

It is against the law to intentionally pick, uproot or destroy bluebells. IIn the United Kingdom, Bluebells are protected species under the Wildlife and Countryside Act 1981. Landowners are prohibited from removing common bluebells on their land for sale, and it is a criminal offence to remove the bulbs.

I can’t decide which of the names above I prefer, but ‘Cuckoo’s Boots’ is amongst my preferences.

Almost half the world's bluebells are found in the UK; they’re relatively rare in the rest of the world. Bluebell colonies take a long time to establish - around 5-7 years from seed to flower.

Bluebells can take years to recover after footfall damage. If a bluebell’s leaves are crushed, they die back from lack of food as the leaves cannot photosynthesise.

Although the bluebell has several popular representations, it’s most often known to signify humility, gratitude and everlasting love. Insects love bluebells, as they provide an early supply of nectar to hungry bees, butterflies and hoverflies.

Bluebell bulbs were often crushed in Elizabethan times, to provide starch for ruffs, collars and sleeves. Even the sap was used to bind the pages of books, while the Bronze Age saw bluebells used to set feathers into arrows.

Finally and to discourage you from picking them. They contain toxic glycosides, poisonous to both animals and humans. As all parts of the bluebell contain this toxin, they can cause skin irritation for some people, just through any form of direct contact with the plant.

My small colony of newly spotted flowers have a long haul before them and a long time to properly establish a permanent site if the sun.

Next time you walk that footpath look out for them.

Apr 9
Eagle-eyed voters will notice the significance of this year's local elections for Parish Councillors. Formby... 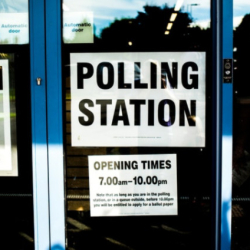 How people in Sefton can access medical help during bank holidays

Apr 11
With Easter fast approaching, Sefton health professionals are reminding people to ensure they use the...